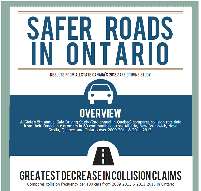 Check out the Infographic!

Here at Bergeron Clifford, we’re always looking out for information on motor vehicle accidents & injuries. In late November we noticed an article in the Kingston Whig mentioning an over 17% increase in collisions on Kingston’s roads between 2011 and 2013.

That insight came from the recently-released 2013 Safe Driving Study from AllState Canada, which investigated their customer’s collision claims across 60 communities in Ontario, Alberta, New Brunswick, Nova Scotia, and Quebec from 2009-2011 and 2011-2013.

It was at first surprising to see that Kingston had the second highest increase in collision claims over the past 2 years (second only to Milton which saw a 21.51% increase) among all the communities surveyed. However, as we looked deeper into AllState’s data (full studies available here and here (Quebec) specifically focusing on Kingston, Ottawa, and Ontario overall, the numbers started to show that Ontario’s roads have generally become safer.

Here are a few highlights:

Of all Ontario communities included in the study, the city of Brampton saw the greatest decrease in collision claims from 2011-2013 vs. 2009-2011. The collision frequency, measured as ‘per 100 cars’ fell by 25.10%. In total, 5 of the top 10 communities across Canada that saw the greatest decreases were in Ontario. Medicine Hat, Alberta led the study however, with a 46.17% decline in collision claims.

The general collision frequency among all communities in Ontario is however nowhere near the leader in the study, which was Montreal with 8.60% collisions per 100 cars.

How Ontario Compares to Other Provinces

AllState’s study from this year looked at 5 Canadian provinces in total, and of them, Ontario ranked #3 in collision frequency from 2011-2013 with 4.99%. The province with the highest results was Quebec, with 7.36%. Here’s how the province’s scored against each other:

Another interesting statistic covered in AllState’s study was how each region in Ontario scored for collision frequency. Eastern Ontario’s numbers were particular interesting to us, and among the 5 regions, it ranked #3, with 4.83% collisions per 100 cars in 2011-2013. The other regions reported these numbers:

The numbers did show positive signs for the safety of Ontario roads, however. Of the 36 Ontario communities included in the study, 25 of them saw a decrease in collision claim rates in 2011-2013 compared to 2009-2011 – with 10 of those seeing double-digit decreases.